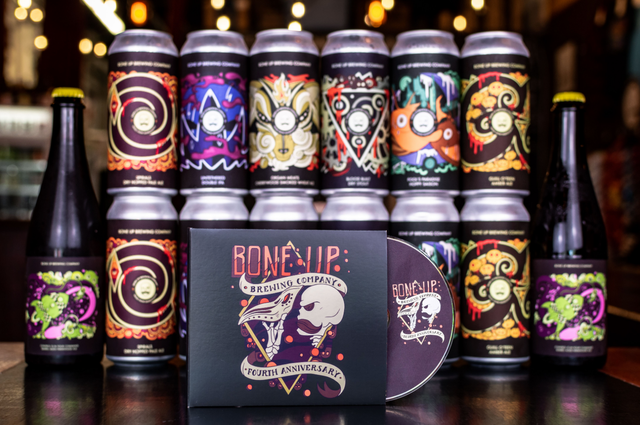 We may not be able to have a "real birthday party" this year, but that don't mean we ain't gonna celebrate, and celebrations need music! Each band scheduled to play a set at our anniversary bash kindly provided music for this compilation, and we brewed a special beer to pair with everyone's sounds, so now you can Rock Out with our Simulated Party Experience! (Bonus points if you do so while drunk in a parking lot, for added authenticity.)

Proceeds from the CD will go towards the contributing artists and the ACLU, so be sure to scoop up your copy along with the mixpack of beer pairings! The physical CD comes with a booklet describing all the beer/music pairings and the label art for each of the beers. Special thanks to all the bands that contributed: Sunken City, DnA's Evolution, The Weisstronauts, Benthic Realm, Organ Meats, Blood Built Empire, and The Guilloteenagers. We are so excited for this!

P.S. If you don't own a CD player, we're including a link to an online playlist of all the songs with each purchase!

P.P.S. We can ship the CD nationwide, but you gotta come to the taproom to pick up the beer, because we ain't allowed to send alcohol through the mail.