Cheese Pairing: Cave-aged cheddar
Food Pairing: Garlic parm wings
Music Pairing (Jimbo's Choice): "The Stay Golden" by And So I Watch You From Afar
Music Pairing (Jared's Choice): "Feast of the Damned" by Black Breath
Best Occasion to Drink: When you're contemplating putting on *real pants* for the first time in months (spoiler alert: you will not be putting on real pants)

Brewers' Notes: Just for laughs, we figured we'd take the recipe from our First Ever Brewday at Bone Up and tweak it a little (or a lot) to reflect all the progress we've made over the years. And it turns out that we've learned at least two things in that time, maybe three! Anyway, we took a whole buncha locally-grown hops and grains and added in a whole mess of orange blossom honey and we sure do think it's a treat, so come try some! 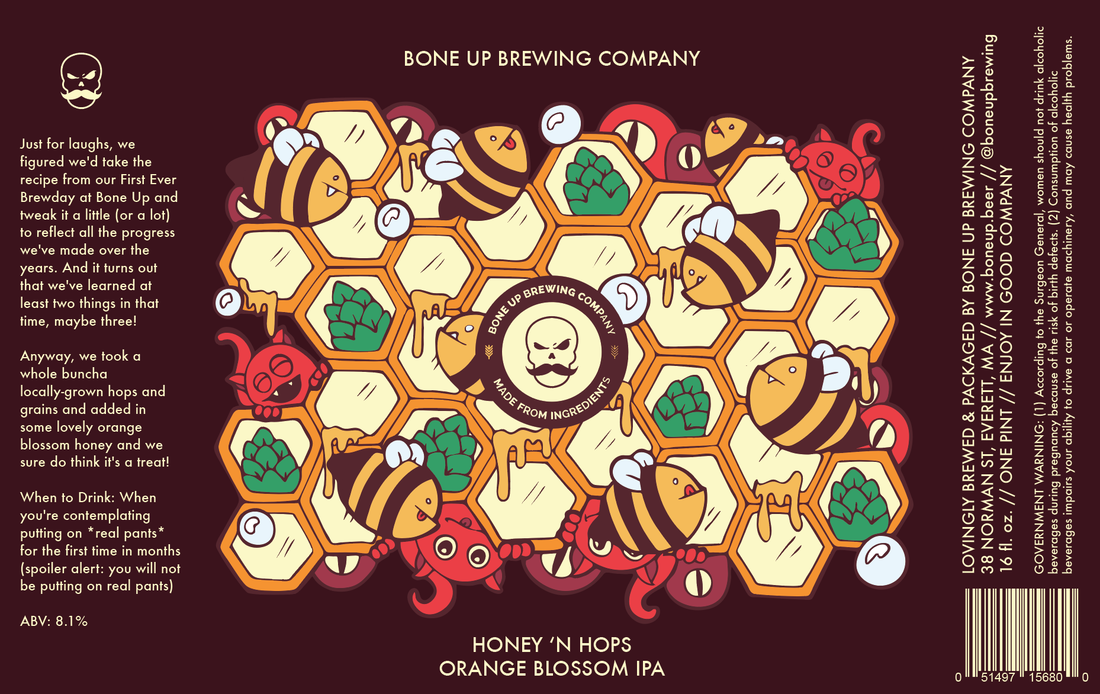 Beer Name: Honey 'n' Hops
Style: Summer IPA
ABV: 5.9%
IBU: 52
Color: Hazy gold; if likened to a sunrise, it would be surrounded by a corona of warm light.

Cheese Pairing: Gruyere.
Food Pairing: Mixed green salad with feta, walnuts, and strawberry vinaigrette.
Music Pairing (Jimbo's Choice): "The Stay Golden" by And So I Watch You From Afar.
Music Pairing (Jared's Choice): "Spanish Flea" by Herb Alpert & the Tijuana Brass or "Glory, Amen" by The .357 String Band.
Best Occasion to Drink: After it's finished raining and the sun is starting to come out again.
​
Brewer's Notes: This is a beer I'd never originally intended to brew more than once, but it ended up being an accidental winner. I had just gotten a bunch of a new hop variety and I wanted to see what it was all about, so I brewed a beer with a really simple recipe so there wouldn't be any other flavors/aromas competing with the hops. And oh man, it was so good. It didn't hurt that I was trying out a cool new hop, but more importantly I'm a big proponent of New Beer Rule #6 - the best beer is the one that was in the empty glass. And considering how fast we went through that pilot batch, I knew it would be silly not to keep using this recipe. Anyway, we go for a brighter/lighter flavor in this particular beer, leaning pretty heavily on fruity/flowery hops. If there's any beer we make that reminds me of the platonic ideal of springtime*, it's this.

*As opposed to the actuality of spring in New England, which is the time when all of our snow turns into slush and we get to learn about all the various subtle nuances of gray.