At its heart, beer is a sociable beverage.

We’ve all bonded with people over beers, and we’ve all heard many an old-timer wax poetic about the loss of the pub as a communal meeting place in town. Hell, our company founders met because of a shared love of good beer (well, beer and heavy metal, but that’s beside the point for now). But in many of our recent adventures, we’ve noticed - to our delight - that we seem to be getting some of that good old-fashioned sociable beer culture back! And, somewhat unexpectedly, we’ve been finding it tucked away in old industrial parks. 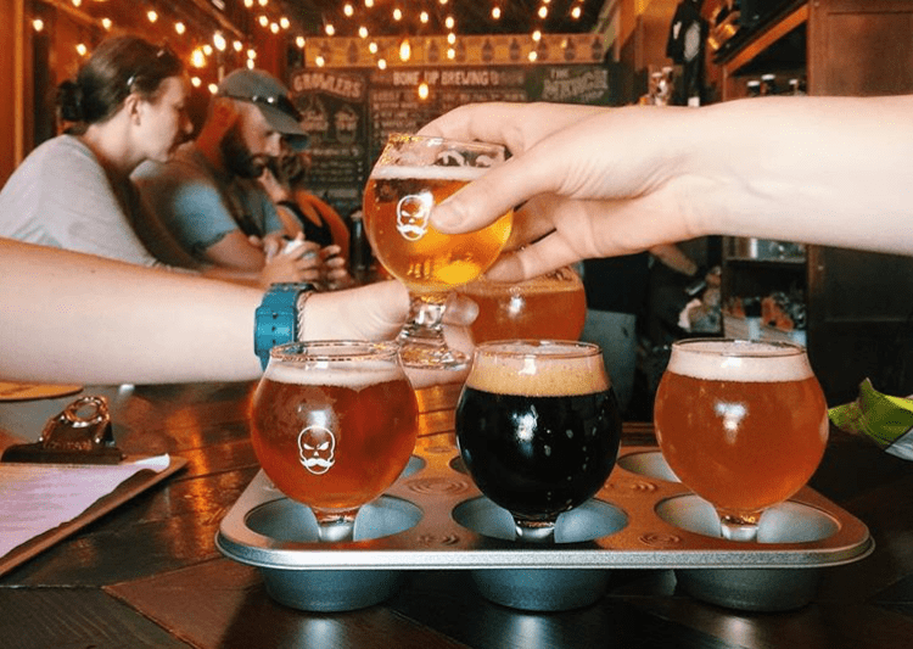 But we're getting ahead of ourselves (where are our manners?). We’re Liz and Jared Kiraly, the founders of Bone Up Brewing Company! We’re a husband and wife team that loves brewing - and drinking - delicious beer. Bone Up is the product of over a decade of constant brewing, near-obsessive research, a slew of jobs in and around the beer industry, a variety of beer travels, and an unfortunate number of people getting cornered into one-sided conversations about things like IBUs versus perceived bitterness, the desirability of isoamyl acetate in Belgian styles, and the inverse relationship between attentuation and flocculation.* Having lived and worked in the Boston area for years, we’re proud to call it home and are thrilled to add our fermentables to our booming beer scene!
*Jared has been described, to his face, as “the Rainman of beer” by a number of people who usually (we think) meant it as some sort of compliment.

And sometimes, you're allowed to simply enjoy it.

We think of ourselves as straightforward, easygoing people and that tends to show through in our beers, hence our slogan: Made From Ingredients. We like beers that are drinkable, unique, and disappear from your glass without you realizing it (I believe the British call that last part moreishness). 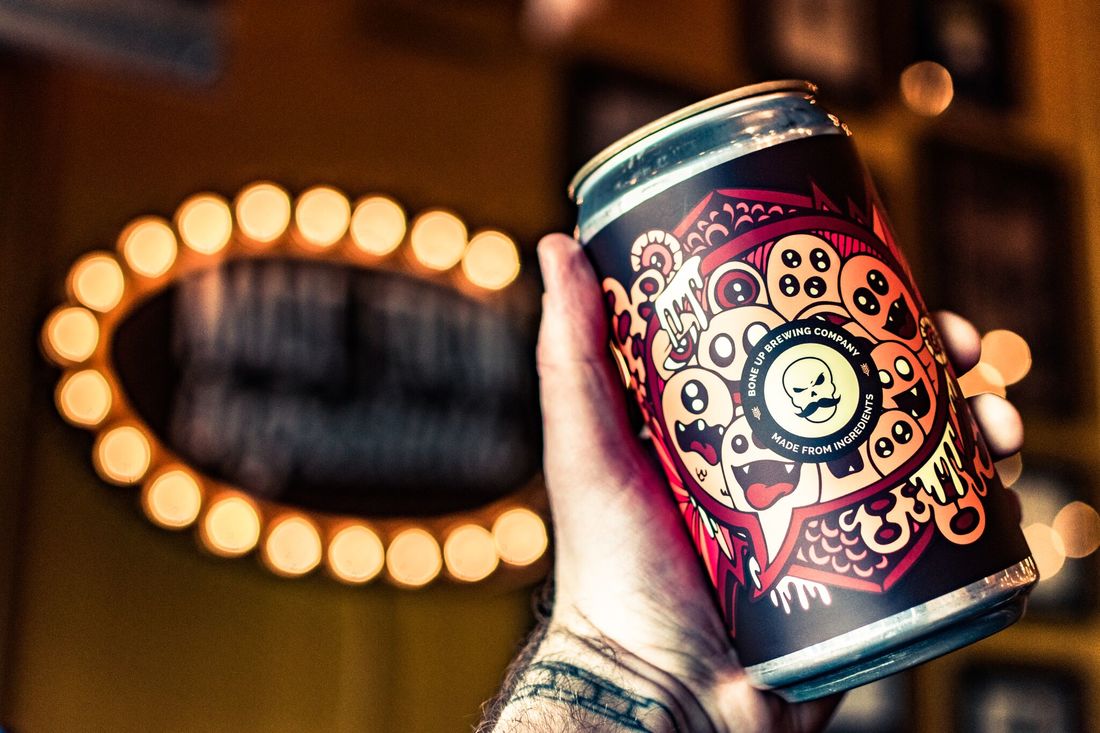 The beers we brew celebrate classic American styles while taking inspiration from the Belgian farmhouse tradition:** many are hop forward or new spins on old classics, all fermented with our house yeast blend for added complexity and unique flavor notes. Jared had his moment of beer awakening in Belgium,*** which has had a pretty big influence on how we build recipes - we're all about those bone-dry, super expressive beers; but at the same time, we both strongly prefer to drink local, so most of our day-to-day drinking has stronger roots in American brewing culture. You could call it American brewing with a Belgian accent, if you were so inclined.
**We use this admittedly-sort-of-meaningless phrase because it sounds better than "beer made with grueling physical labor; using unsophisticated, often sort of bad equipment."
***He went to Brussels with the intention of eating waffles for three days straight. After his first sip of a Westmalle Tripel, light shone down from the heavens, angels started singing... yada yada yada now he makes beer. 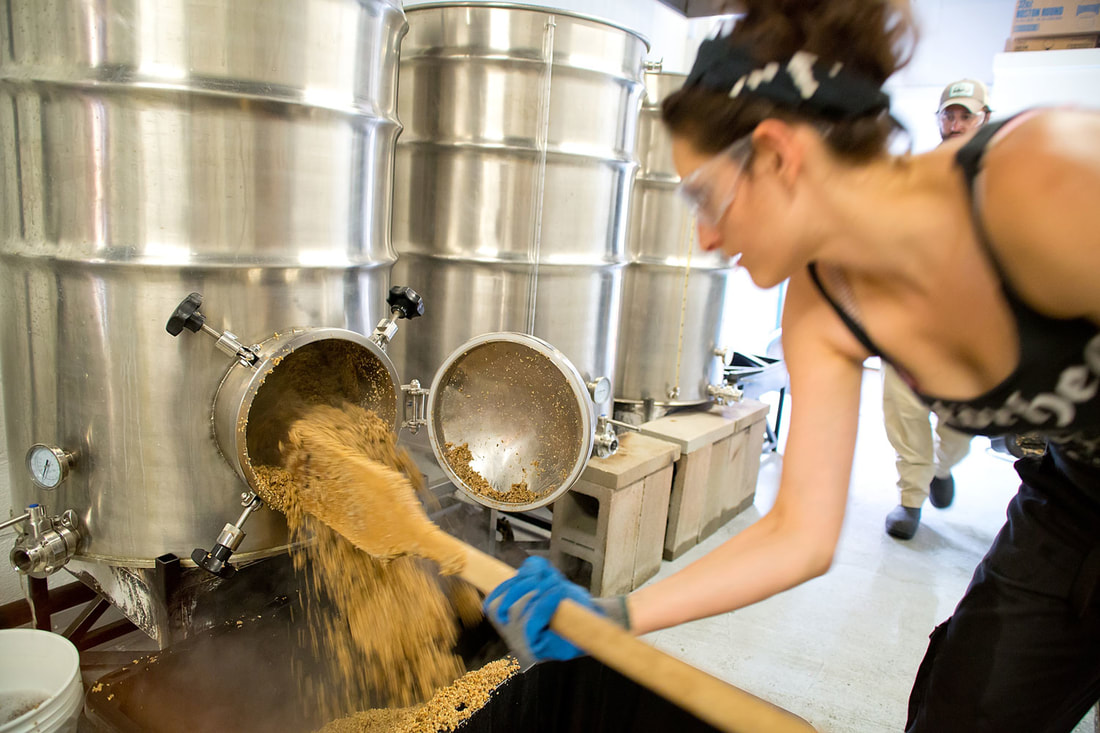 The Journey (Or, if You Prefer, a Saga of Perpetual Production Delays)

﻿​In early 2014, our intrepid brewers set about the Boston Area, looking at every suitably-sized industrial/commercial property in search of the one with that "special something" (low rent). After months of searching, some deliberating, some hemming and a little hawing, we found it! Specifically, we found an out-of-use industrial laundromat with a trash-filled dirt parking lot, a surprising lack of interior walls and/or lights, and a back bathroom (complete with shower) with what appeared to be blood on the floor. One look at this obvious set-up to a horror movie and we were smitten.

Oh you sweet, sweet fools.
​And oh man were we ever wrong about that last part. Summer came and went with maddeningly little progress on buildout, and it wasn't until fall 2015 that we were able to get in there and work our magic. But when we did, we set about that weird lil' space with such a fervor that it's now nigh-unrecognizable when compared to its original self. It was a maelstrom of painting and hammering and swearing and sanding - everything that we could legally build/fabricate/install ourselves, we did: from the lights to the cold room to the floors themselves. And when our own admittedly-limited experience wasn't enough, we set about straining our families' willingness to do us favors - Jared's dad built our bar, Liz's dad and uncle installed our floor, and so on. What I'm saying is - we think of this brewery as an extension of ourselves, and we've busted our collective humps to make it the best we can.

Let's do it ourselves, we said! How hard can it be, we said!
As our own buildout came to a close, and the progress on the exterior of the building sadly remained in the "it'll be done in a month" stage that it had been in for two years, we reached a decision point: brew beer

"Made from ingredients in scenic Everett, Massachusetts."
After a whole summer of dialing in our flagships and distributing our beers (sometimes - okay fine, always - by bicycle)  around the Boston area, we finally got the go-ahead to open our doors to the public! Since opening the taproom in August 2016, we've brewed over two hundred different recipes, expanded production twice (going from microscopic to super tiny to regular-ass tiny), and made oh so many friends along the way! Our goal has always been to have jobs we love while creating a sustainable community and a place where people can come, relax, and have fun amongst a variety of beer. We couldn't imagine being happy doing anything else, and we're just glad you're a part of it! 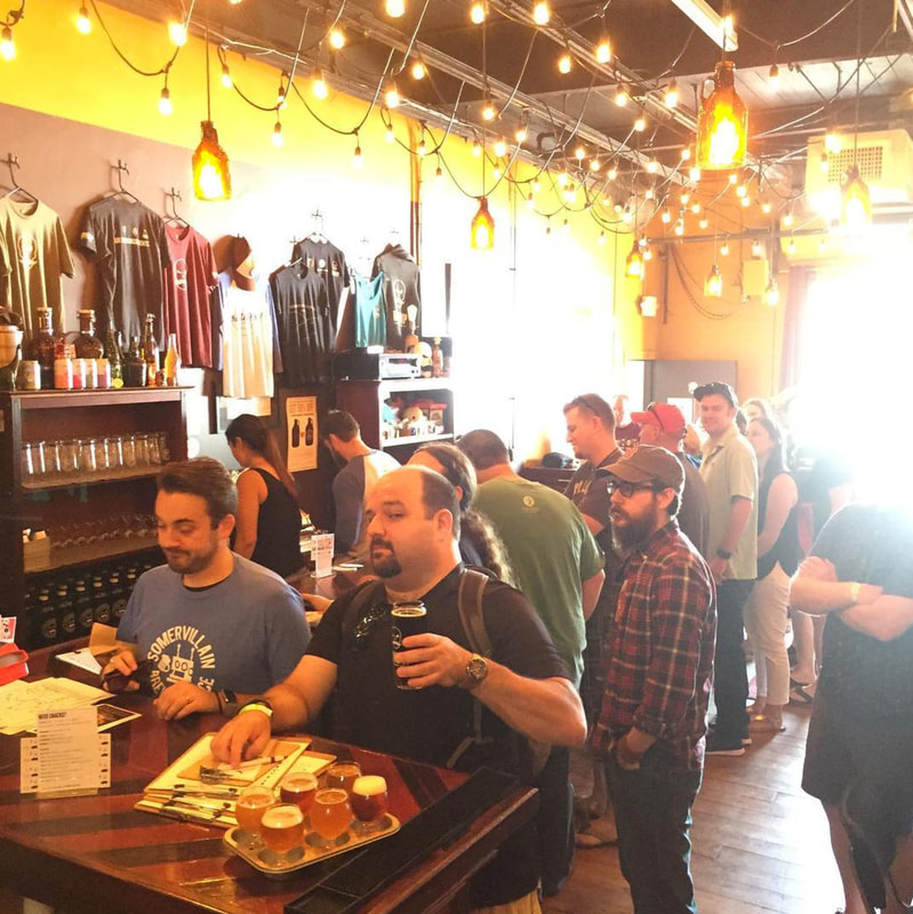 And since this lil' brewery is pretty much the entire world to us (in a fairly literal sense, not unlike bromeliad frogs or - not to put too fine a point on it - goldfish), we've spent every waking moment trying to think of more ways to cram more fun shit in here! We've got beers and games and casks and snacks and coloring contests and Big Stupid Cans and weird niche trivia nights (yes, there are several now) featuring intentionally-terrible prizes and pinball and an unusually-large selection of dried meats and a kickball league and sometimes (as in, way more than you might expect) there's cake. And that's just on a normal day - we're also bustin' our humps tryin' to bring in a buncha cool food vendors to set up popup style and make some tasty treats for you in the taproom, and dang but we've had some good eats up in here! 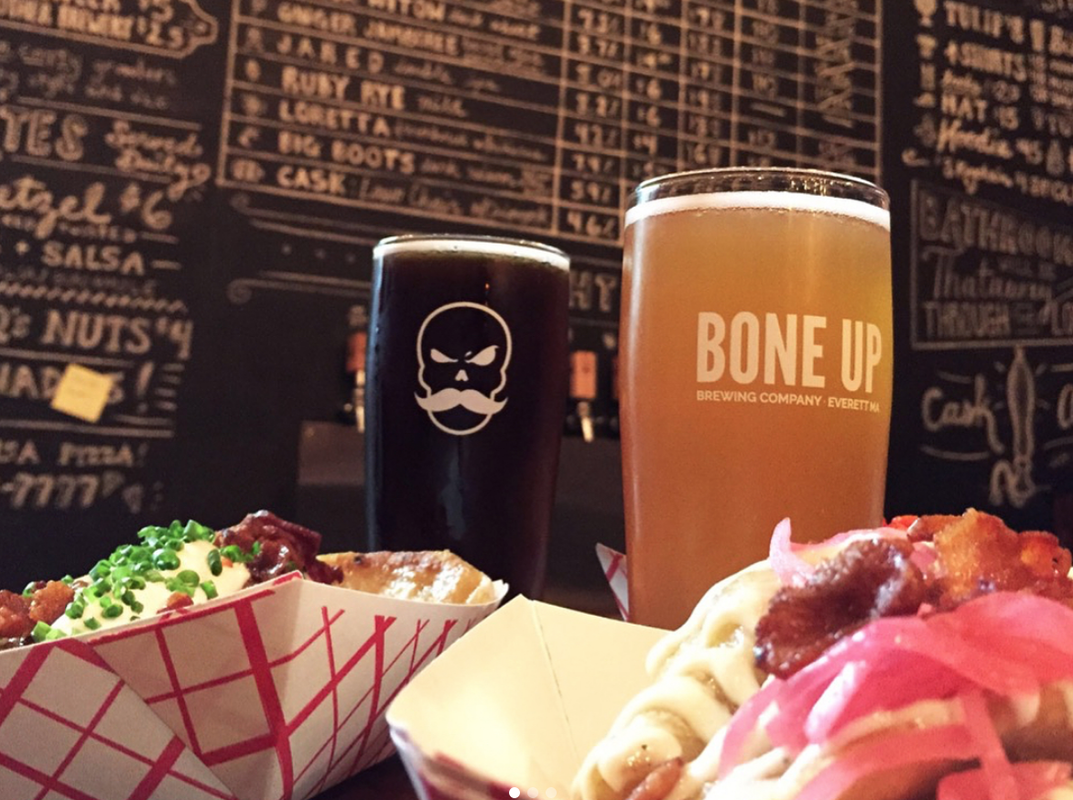 And it turns out that havin' a buncha beer and a buncha fun times means that every now and then (i.e. pretty much constantly) we get to meet a buncha cool people and sometimes they also have cool ideas! More to the point, our 3.5 BBL brewhouse makes us the Boston area's smallest brewery (and let's be real, nobody's fighting us for that title, though we do wear it proudly), and that means we can play around with some pretty rad small-batch stuff: we've made beer for weddings and events and charities and bands (though the bands often found out after the fact, as we were politely asking them not to sue us) and we've got a (loosely) ongoing series of beers made to honor the memories of dogs that have brightened our lives in the past. ​

Anyway the point is that we put in a lot of work for a (relatively) small amount of beer, but we like doin' it because beer is fun and we wanna make things that people enjoy. And that hard work does pay off, my friends! In March 2018, we signed a new lease, which doubled our space within the building which means our brewers no longer have to give each other piggy back rides if they wanna accomplish separate tasks at the same time, but more importantly it means we created more of EVERYTHING! After another year of sawing and hammering and cursing and visiting the fine folks at city hall multiple times per day, we opened up our expansion in March 2019 with more taproom, more patio, more silly events, more snacks, more beer, more cake, more games, and more elbow room for everyone! Woohoo! 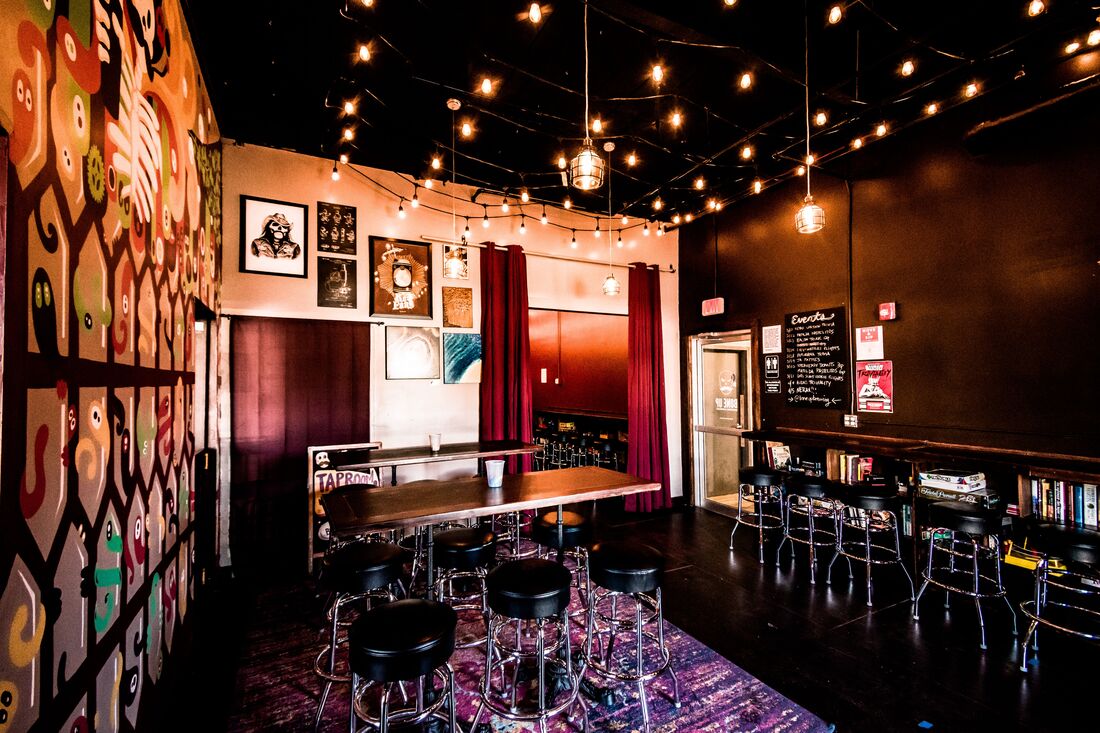 We cruised along and settled into this fine space over the course of that year with a ton o' cool events and beer releases, entering 2020 with starry eyes and big aspirations! But in March, the rug got pulled out from under us. All of us. 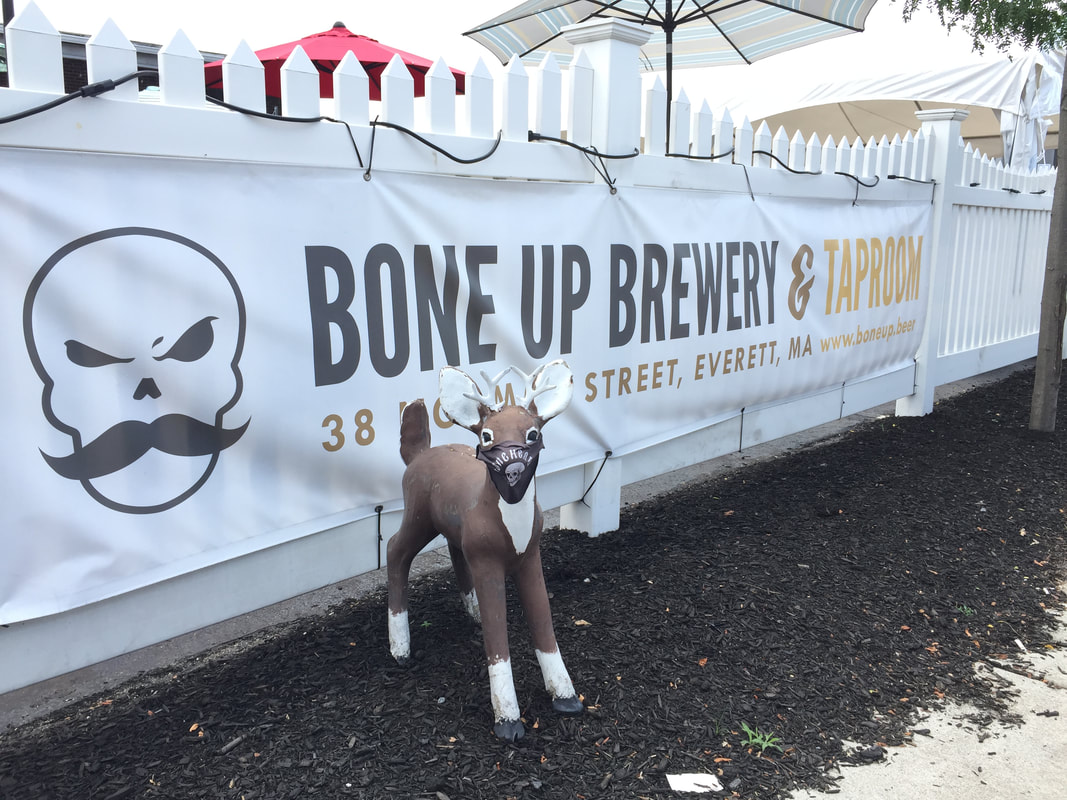 But we made the best of it! Despite all the weird/terrible things that happened in 2020, there were also a lot of cool things we managed to accomplish! We started canning (using a mobile canner) and then we pretty quickly graduated to having our own canning line! ​ 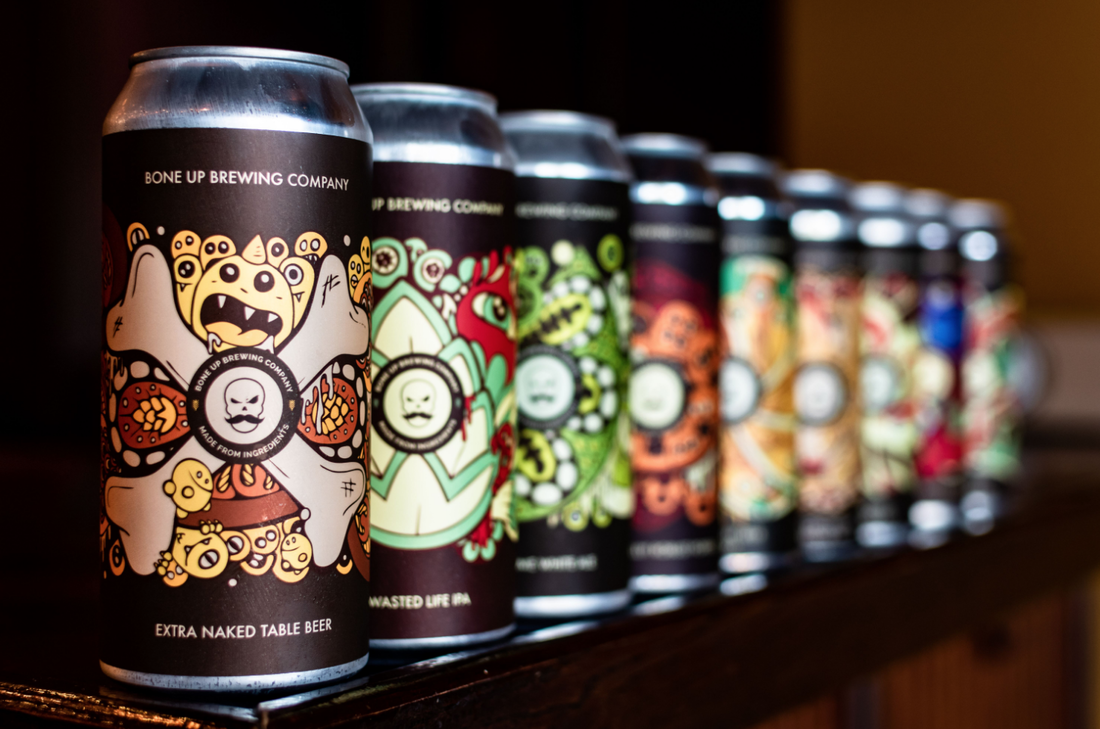 Plus, we vastly expanded our outdoor space (what was once an at-best confusing parking lot is now a wonderful beer garden!) and we implemented yet another of Grace's semi-drunken ideas and this time we all got matching-ish tattoos of El Pulpo (the first time we ended up implementing one of her spirited suggestions we ended up starting a kickball league) and we started home delivery and vastly expanded the number of stores that carry our beer (from one to "more than one") and we put out a CD and and we were able to brew more beer than ever before and anyway the point is that even when the world is falling apart, we can still do a lot of cool shit and make people happy, which is what it's all about. 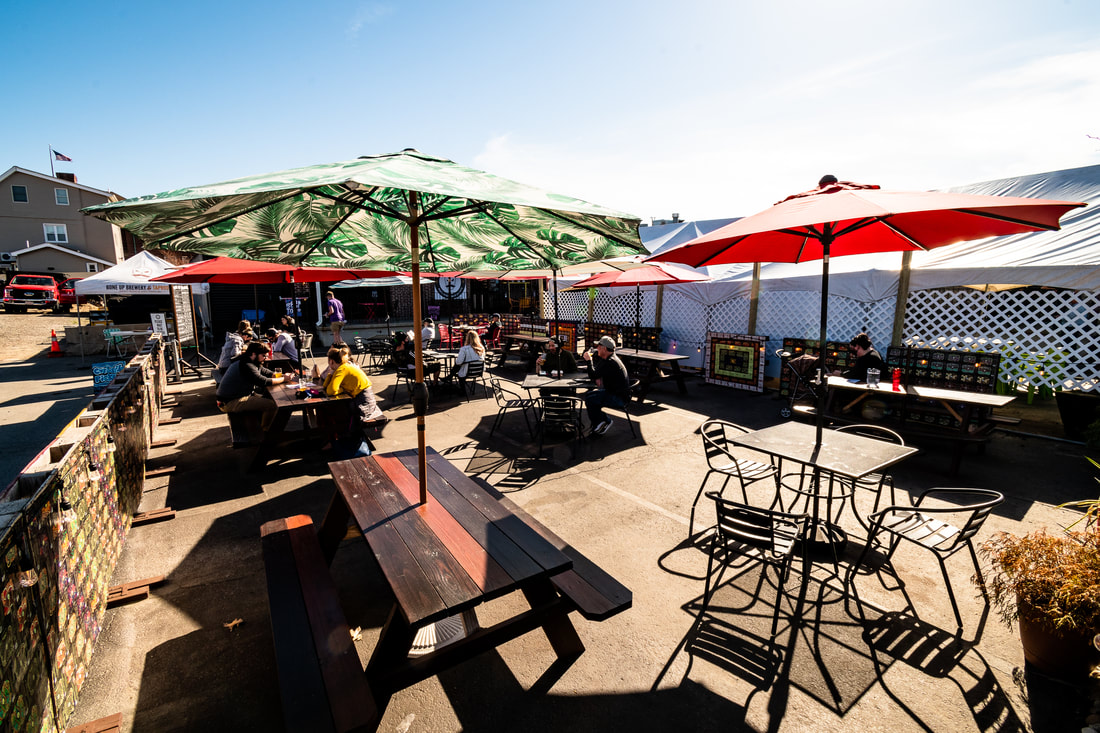 So stay tuned for what's next for Bone Up: we update our blog every Wednesday with our latest antics, beer releases, and fun times ahead!

Questions We Get Asked a Lot

"MADE FROM INGREDIENTS?" SERIOUSLY?
Absolutely. We stand by that.

I CAN'T TELL IF YOU'RE SERIOUS OR NOT.
That’s… not really a question.  But as Kilgore Trout famously said, “I won’t know myself until I figure out whether life is serious or not.” (that quote may not be totally accurate.  Due to our policy of not looking things up, we have not looked it up)

HAVE YOU EVER MADE A BEER THAT TASTES LIKE WAFFLES?
We did make a pilot batch that was supposed to sort of taste like waffles, but it turns out people expected it to taste exactly like waffles and that doesn’t sound appetizing at all.  So the moral of the story is: we should just make a beer that’s meant to be paired with waffles (Nutella and bacon?  I have no idea).
​
WHERE IS THE BREWERY LOCATED?
We're located at 38 Norman Street, right in the heart of Everett's bustling fermentation district.

"CLASSIC AMERICAN STYLES BREWED WITH BELGIAN TECHNIQUES?" WHAT DOES THAT MEAN? IS THAT JUST SOME MEANINGLESS MARKETING MUMBO JUMBO?
​To answer your second question first: No. Not entirely, anyway. In short, we needed a concise answer to the question of "what kind of beers do you make?" and this is the most accurate one-sentence answer we could come up with (from extensive personal experience, we know that longer answers are almost always met with the "I'm just waiting until you're done talking" blank stare o' death). If you want a needlessly long explanation of what, specifically, we mean by that then please click here (warning: it's pretty dry, so don't go in expecting our usual zany antics. But it does include a section full of poorly-remembered history, so we got that goin' for us, which is nice).